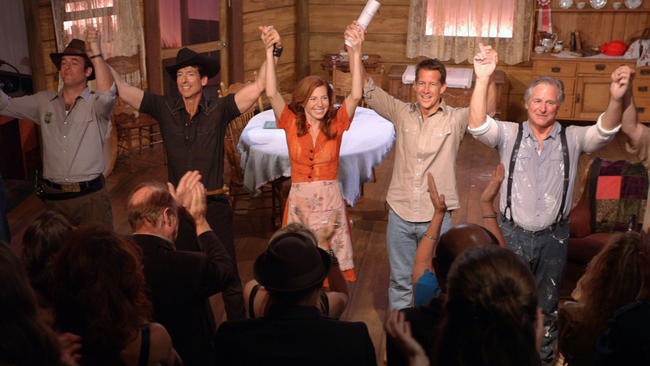 I first fell in love with the character of Maggie Chase when I saw Henry Jaglom’s Hollywood Dreams for the first time, years ago. She returned in the sequel to that film, Queen of the Lot, a few years later, and we continued to watch this unique and charming character evolve. Now, with Jaglom’s latest film, Ovation, we find ourselves in the company of Maggie once again – played by the beautiful and eternally charming Tanna Frederick – only this time, she has moved from the silver screen to the stage, where the backstage antics never cease – antics which may possibly lead to a murder.

This time around, we find Maggie as the headlining star of a stage play, entitled “The Rainmaker”. The play is a critical success and the audiences love it, but financing is low, and the production is in danger of closing. The manager of the theatre (Cathy Arden) is trying her best to find the funding that she will need to keep the theatre running, but Maggie’s manager (Zack Norman) has other plans for the star of the show.

Enter Stewart Henry (James Denton) who attempts to woo Maggie away from her stage family, and onto a television series that he promises will make her an even bigger star. Before long, these two develop a playful relationship and begin to fall for one another, much to the dismay of Maggie’s boyfriend (David Lee Garver) who is sexually frustrated, jealous, and disillusioned with the theatre life.

On top of everything else, an actress from another production in the same theatre named Zoe, played by Jaglom’s daughter, Sabrina, has become involved with an actor from “The Rainmaker” who has a short temper and quickly becomes abusive. Watching all of the drama from above is the Zoe’s brother, the sound and lights technician named Michael (Simon Jaglom) an observant and highly intellectual young man, who witnesses a particularly violent confrontation between Zoe and her boyfriend. In a valiant attempt to protect Zoe, Michael attacks her boyfriend, and may or may not have killed him.

This is one of many surprises in a film that is full of them. Jaglom’s improvisational style suits this material well, giving the actors more than enough room to live in the moment, making the characters and situations as authentic as possible. And while this may be one of his darker films – it most definitely is – it is also playful and hilarious, at times. There are clever devices throughout the film that add to the sense of mystery, including a backstage psychic who appears on the scene every now and again with eerie predictions for the future. A moment later on in the film, featuring Maggie and the psychic, is one of the funniest things that I’ve witnessed in a long while.

Tanna Frederick is simply marvelous here as Maggie Chase. She has played this character two times before, but with Ovation, she brings an intensity to the character that caught me off guard. There are some unexpectedly powerful moments here. If there was any justice in the world, Tanna Frederick would have an Oscar nomination for her work here. She certainly deserves as much praise as she can possibly get for this performance. My hope is that we will see more of this character in future projects – and her chemistry with actor James Denton is another element of this film that will have you glued to the screen.

I must also say that I was incredibly impressed by the supporting performances from Sabrina and Simon Jaglom. We have watched these two grow up on the screen, and it was a joy to see them give their all in these two roles. Excellent work.   Many familiar faces turn up throughout the course of Ovation, including Diane Salinger, David Proval, and Ron Vignone – always a pleasure to see them on the screen.

Henry Jaglom films have always fascinated me, because the man takes the people, places, and situations in his life and creates art using the tools that are at his disposal. When Tanna starred in “The Rainmaker” a year or so ago, Henry took the cast from that production and immediately made this film. It’s refreshing to see an artist that is so in love with his craft that he wants to share it with everyone. The man is an inspiration.

Ovation is one of the finest films that I have seen all year. It is both hilarious and unexpectedly moving – a pitch-perfect backstage mystery that you will want to revisit over and over again, featuring wonderful performances from a stellar cast.

This film is highly recommended!