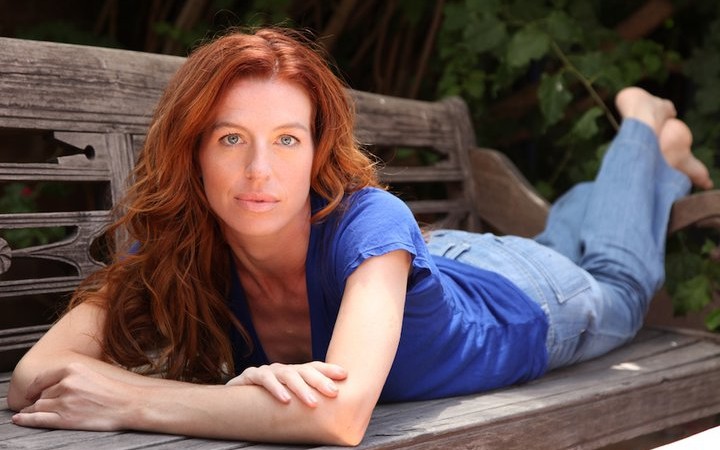 I had a wonderful chat with actress Tanna Frederick, all around wonderful human being and muse of legendary independent film director, Henry Jaglom. We discussed our mutual appreciation (obsession, maybe?) with Henry’s work, and I asked her the following questions about her experiences with Henry, as well as her upcoming projects.

ADAM RENKOVISH: How did you get to know Henry Jaglom?

TANNA FREDERICK: I was in a play in Los Angeles, and one of the actors came to rehearsal and said that he just had the best day of his life filming with the most brilliant director in the world. I asked him who it was, and he said Henry Jaglom. He sent me a copy of Déjà Vu to watch, and told me that if I sent Henry a letter telling him how much I liked his work, he would cast me in one of his films. That night, I had a night shift waiting tables and I was sleep deprived, and then I went home and diligently watched part of the movie. I then wrote Henry a four page, single spaced letter about how much I loved Déjà Vu, and how brilliant it was. I hand delivered it to his office. Sure enough, I got a call the very next day, and it was Henry on the phone. He started telling me how much he loved my letter, that he loved that I got the movie, and he started asking me all of these questions about my letter, and invited me to a screening of Festival in Cannes, where we met. Later on, he gave me one of his plays called “A Safe Place”. I ended up producing it and running it in Los Angeles for eight months in order to prove to him that I could be a lead in one of his films. Three movies and four plays later, I finally told him that I had only ever watched the opening credits of Déjà Vu when I wrote him that letter, and that I had never seen the entire film. I expected him to hate me, but thankfully, he is such a lover of the hustle and the game of Hollywood, that he was absolutely delighted with the story, and here we are, making another film together. Lucky for me, he wasn’t pissed.

ADAM: What is it like working on one of his sets?

TF: It’s amazing. I think I’m really blessed, because the first big movie that I landed was Hollywood Dreams. It was my first movie of weightiness, and I was thrown in with all of these brilliant actors. Henry is an actors director. He really loves the actors. He protects the actors, he makes sure that the whole crew is making a safe space for the actors and not disturbing the actors. He’s so freeing and trusts himself and has a positive narcissism of his talent. He allows the actors to blossom and find their own way of saying the material. The actors are really allowed to fly on his sets. He is incredibly confident.

ADAM: You’ve worked with several of the same actors and actresses from Hollywood Dreams, Queen of the Lot, and Irene in Time. Does this familiarity help your performance at all?

TF: Definitely. Well, I guess it helps and it hinders it, because you’re always looking for a fresh, real, authentic take. Henry has a good B.S. detector, so if you give a false note, a false reading, a false emotion, he’s going to call you on it. Sometimes, it’s really exciting for me to be working with some of the new leading men that have been in Henry’s movies, like Noah Wylie, Michael Imperioli, and Judd Nelson. Each time you work with a new leading man, it’s like a first date or having a new boyfriend. They have different energies and attitudes and that’s being captured on film. That always helps out with what Henry’s trying to pull from the performances. Also, having the same actors in many of the films is like having a family. It’s like what I’m used to, which is theatre. You’re excited to be on set with your friends who are now like film family. You’re excited to play ball with them, you’re excited to laugh and cry with them. Hollywood is such a busy place that you don’t get to see people that often. I either get to see them at New Years or on a film set, so it’s a lovely experience. It definitely helps in terms of feeling safe and being excited about working.

ADAM: What’s next for you?

TF: Two more Henry Jaglom films. The M Word and Ovation. The M Word stands for menstruation, menopause, and men. But it mostly focuses on menopause. Frances Fischer plays my mother. Mary Crosby comes back as one of Henry’s returning cast members. Two new additions to Henry’s little farm are Michael Imperioli from “The Sopranos” and Corey Feldman, who I am in a love triangle with. My mother, who is going through menopause comes to stay with me. Her husband, played by Gregory Harrison, is cheating on her. It’s one of his women comedies, where he interviews a whole bunch on women during the course of the film about menopause, and then weaves the story through the interviews, much like Eating. Since I’ve known Henry, he has wanted to do a film about menopause. The cool thing about The M Word is that there is really no dialogue about menopause in film and in television. Once you are dealing with such a sensitive subject, and women are able to laugh about it with each other, it can be a healing process for them. We start shooting Ovation in three weeks. He’s always wanted to do a film about actors backstage. Ovation is a romantic murder mystery. I’m very excited to work with James Denton from Desperate Housewives. He’s going to be an amazing leading man. It should be a blast.

ADAM: What was it like working with one of The Goonies, Corey Feldman?

TF: (Laughs) It was awesome, are you kidding?! I had to do a bit of finagling in order to get Henry to know who he was. I made him watch a Corey Feldman marathon. As soon as he saw him in all of these films, he was like, “Oh, he’s a genius actor. He has amazing instinct.” We did a reading of one of his plays, and Corey was brilliant, as he was all through his career. He’s fantastic! I had so much fun working with him. It’s a great tennis match. He just slams the ball right back into your court. He never misses a beat. He’s a consummate professional, and very funny. Very, very, very funny. He’s also very sensitive and lovely. For all of the stuff that he’s gone through in Hollywood, he has the sweetest underbelly to him, and has managed to maintain that in a town where it is difficult to protect that. It was a great experience.

Tanna Frederick’s films are available on Amazon.com. Check them out!